Home Communication Your Silence is Deafening: How to Create INSTANT MAGIC with a Few Words

Your Silence is Deafening: How to Create INSTANT MAGIC with a Few Words 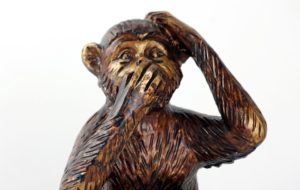 Allow me to take you on a brief journey that demonstrates why communication is so important if you want to engage and keep loyal customers and employees.

I’m at the airport, standing in line, waiting for my turn to order a much-needed cup of coffee at 6:10 a.m. I make my way to the counter and greet the cashier with a cheery, “Good morning!”

Thinking she simply didn’t hear me, I repeated, “Good morning.”

A glare from her is my return greeting, while she actually clamps her lips together to show me she is not going to utter one word. Okay, so she obviously heard me; she just doesn’t want to speak to me.

After completing my purchase, I can’t help myself (those of you who know me well are not at all surprised by this!) and comment, “You know, it’s pretty disrespectful to intentionally refuse to speak to someone when they speak to you.”

The manager overhears my comment, asks what the problem is and apologizes for the cashier once I explain what happened. (Flash forward one week: the same cashier is there, behaving the same way to every customer in line, so I buy my morning coffee from a different vendor that day, even though I like the first vendor’s coffee better. However, on my third visit, I notice that she is no longer there… big sigh of relief… and I return to my favorite coffee vendor.)

I know, some of you are rolling your eyes and saying, “How can you be that cheery in the morning?!” Point taken, but if you’re one of those people who doesn’t want to be cheery and greet people in the morning, then please don’t accept a position where it is one of your most important duties to do so.

The point is that a simple word or two would have created INSTANT MAGIC for everyone she dealt with. A greeting of “Good morning” or “How may I help you?” (in fact, almost any words) would have eliminated the impression of rudeness and an uncaring attitude that puts off customers and co-workers alike.

It’s not just “everyone else” who must follow this practice. We must do it ourselves in our everyday lives, as well. For example, just the other day I was standing in front of the self-service counter and drink machines (again at the airport) when I spilled coffee on my coat. While I fumbled with bags, food, and wet napkins, trying to remove the coffee before the stains set, I could feel my fellow travelers getting a little impatient with me for blocking up the area.

I turned and said, “I’m sorry, I just spilled coffee on my coat.” INSTANT MAGIC! My fellow travelers went from slightly annoyed (and getting more so as my silence went on) to instantly understanding and extremely helpful! One offered a WetNap she had in her bag, while another offered me her cup of water, saying it would be more convenient for me to use that (and she was willing to inconvenience herself to go back to the counter and request a new cup).

WOW! A couple of words of explanation was all it took for people to go from annoyed to instantly compassionate and helpful.

The same concepts apply in the workplace when dealing with our team members and colleagues. A few simple words to show we care about others as people, rather than employees who exist solely to work for us, does wonders for their attitude and willingness to go the extra mile for customers, for each other and for us.

Consider the scenario of the golf club staff members who are gathered a short distance from the Manager’s office, planning their morning duties. In the office, the Manager and two other leaders are similarly engaged in planning their day. When the leaders’ meeting ends, all three exit the office and walk right past the staff members – without one word of greeting – as if they didn’t even exist!

The staff members feel disrespected and undervalued by their own leaders. How hard would it be for those leaders to create INSTANT MAGIC by acknowledging them with a “Good morning” or “Thanks for being here right on time – we have a busy day today” or “Good to see you!”? And how inspired will these staff members be to subsequently greet and interact with customers during the day, rather than treating them as if they were simply part of the scenery they needed to walk past on their way to perform their duties?

In one final case, a much beloved Facilities Manager with many locations spread across his facility had no problem engaging his workforce and getting them to go to the wall for him – even the Millennial generation that many Baby Boomers and Gen Xers find difficult to engage. But this Baby Boomer manager talked to them, visited them (even when he didn’t need anything from them) just to say hello and see if they needed anything from him… nice change, huh? Instead of asking for something from them, he asked if he could do anything for them! Because he cared about them (and showed it), they cared about their jobs (and showed it) because that was one way to demonstrate how much they cared about him in return.

When that manager retired, he trained his replacement, telling the new manager what a great group of guys he had, and offering his best piece of advice: visit the different locations once in a while, talk to the guys, get to know them, let them get to know you.

About a year later, he heard from the new manager, who complained bitterly about how he couldn’t get the guys to do anything without repeatedly asking, and even occasionally threatening, because they weren’t doing their jobs.

What? This didn’t sound like his team, so he asked the guys (many of whom still kept in touch with him) what was going on. They told him they never saw or heard from the new manager unless he needed something from them. He hadn’t bothered to try to talk to them or get to know them at all. In fact, their exact words were: “If he doesn’t care about us, why should we care about him?”

BOOM! Same team, same duties… different results. The tragedy is that this new manager could have created INSTANT MAGIC with his team members if he had just taken the time to visit and say a few words to them once in a while to show that he cared about them as people first, and employees second. Instead, his silence was deafening as it sent the subtle message that he wasn’t even going to bother talking to them unless he needed something from them.

The above stories are great lessons because, while we all understand that leaders can’t be “best friends” with their team members, we often forget that there is a big difference between friendship and friendliness. Friendship involves doing things with and for each other, even outside of work, and could be perceived as fostering favoritism inside the workplace. But friendliness simply involves being human and caring about others, regardless of their position, status or relationship with us outside the workplace. When we’re friendly, our humanity dispels the impression of indifference and disrespect inside the workplace.

Remember, every human being on the planet wants to be valued, appreciated and listened to… in other words, respected. And the manner in which employees perform their work reflects not only their work ethic but their leader’s attitude, caring and respect for them.

A few simple words of greeting, acknowledgement, or explanation are usually all it takes to create the INSTANT MAGIC that stops the internal, one-way (often negative), dialogue going on in someone’s head and change it to a positive, two-way, conversation that includes you.

Keeping these lessons in mind will not only allow you to create INSTANT MAGIC for everyone you encounter, but it will inspire and show them the way to do the same for everyone they encounter, which has the power to change the course of our businesses, our personal lives and the entire world, a few respectful “human” words or phrases at a time.